Chipotle Cream Sauce is a rich, cheesy sauce. The chipotle peppers add a touch of smokiness and leave just a hint of spice on your tongue. Serving this sauce with chicken and spinach over spaghetti squash keeps this dish low in carbs. It’s also naturally gluten free!

Low carb dieting isn’t always easy. I’ve seen time and time again, that a lot of people struggle with this way of eating and simply do not know what to eat. Having a constant stream of variety and flavor helps to keep things fresh and prevent boredom. I’ve been getting more creative with recipes to help myself (and you!) enjoy low carb meals even more!

The Chipotle Cream Sauce is a basic cream sauce with added chipotle peppers. There is no flour in the recipe, but the sauce will still be plenty thick enough to coat the chicken and spinach.

This recipe, as written, will result in a meal that has a smoky, cheesy flavor with just enough spice that you might want to keep a cup of water close by. You can create a milder sauce by removing all of the seeds from the chipotle peppers before adding them to the sauce. For more spice, keep all the seeds in and add another pepper if you want it really hot!

This Chicken & Spinach with Chipotle Cream Sauce can be served over a variety of bases. To keep the meal low carb, serve it over spaghetti squash. If you’re not low carb or are cooking for people with different dietary needs, you can serve it over traditional pasta (gluten free, if needed) or even sweet potato noodles!

Cut the chicken into bite-size cubes. Mince the garlic, but keep the 2 cloves separated. Roughly chop the spinach. Mince the chipotle peppers, removing some, all, or none of the seeds, depending on how spicy you want the sauce to be.

Heat the olive oil in a large skillet over medium heat.  Add 1 clove of minced garlic and cook until fragrant, about 30 seconds.

Add the chicken to the skillet and cook until it is not longer pink in the center, about 7 or 8 minutes.

Pile the spinach over the chicken and cover.  Cook, stirring occasionally until the spinach is wilted and tender, about 3-5 minutes. I usually throw the spinach leaves in whole and break them up as they cook.

Meanwhile, add the butter to a medium saucepan over medium heat. Add the second clove of minced garlic and cook for 30 seconds.

Add the chipotle peppers and cook for an additional 30 seconds.

Slowly add the heavy cream and increase the heat to bring to a boil.

Lower until the cream comes to a simmer, then whisk in the Parmesan cheese until smooth and season with black pepper to taste.

Pour the Chipotle Cream Sauce into the skillet with the chicken and spinach and stir to combine well.

Serve over spaghetti squash, or noodles of your choice, and garnish with chopped cilantro, if desired. Enjoy! 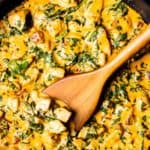 ** Nutritional information is an estimate and will vary. 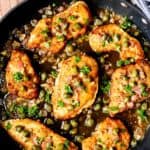 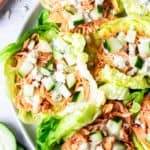 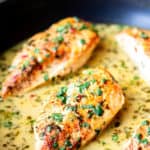 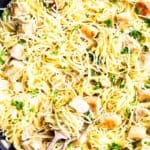 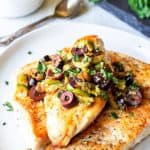